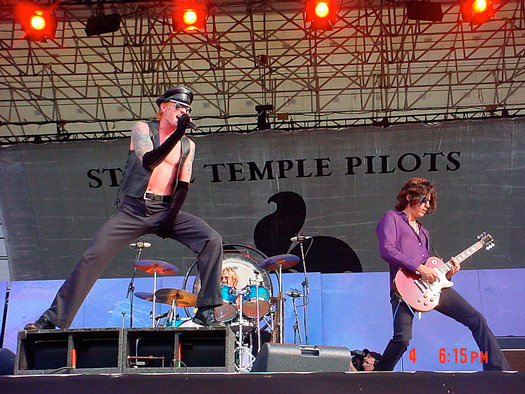 Why You Need a Solid Written Agreement with Your Partners: The Unfortunate Tale of Stone Temple Pilots

The current legal battle among members of the Stone Temple Pilots may evolve into an excellent example of how to avoid common mistakes that business owners make every day when launching an enterprise with their friends or collaborators; that is, most new business partners do not commit to the difficult process of negotiating written agreements to express their expectations and assumptions. Failure to have any agreement among business owners is a disaster waiting to happen, often requiring litigation to determine the rights and obligations of each partner to the enterprise.

Stone Temple Pilots is arguably one of the most prolific post-grunge musical acts of the 1990s. Hits like Plush, Creep, Interstate Love Song, Wicked Garden and Vasoline, to name a few, once ruled the airwaves and the charts. Despite their early magic together, the band members are now locked in a legal battle with one another, incurring legal fees and bad press. While the moral of this story may also be the importance of carefully selecting your business partners, the current legal battle among band members is the more important concern over protection of the enterprise’s intellectual property.

Three members of STP have commenced legal action against the fourth member, lead singer and self-proclaimed frontman of the band, Scott Weiland, alleging breach of contract, breach of fiduciary duty and violation of the federal trademark act. The breach of contract claims are premised upon Weiland’s alleged failure to keep concert performance commitments to the band for a 20th anniversary tour (celebrating the release of STP’s most popular album, their first, entitled, Core) and usurping STP’s opportunity by launching his own solo tour performing hit singles from both Core and STP’s sophomore effort, Purple. According to Rolling Stone Magazine, Weiland’s tour performances to date have focused “primarily on Stone Temple Pilots’ first two classic releases.”[1] In fact, Weiland has dubbed his concert schedule as the Purple at the Core tour.

In their complaint against Weiland, filed in Los Angeles Superior Court on May 24, 2013, the band asserts exclusive rights to the name Stone Temple Pilots along with the band’s artwork, copyrights, logos, name, songs, and trademarks. The band’s claims are not solely limited to common law rights in their body of intellectual property but are built upon two written agreements among the band’s members entered into in 1996 and 2010. According to the complaint, these agreements restrict use of the band’s name to the enterprise itself (in this case, a California partnership). STP has consequently requested the court to issue an order prohibiting Weiland from performing any songs in the STP catalogue in his solo career (and even asking the court to prohibit Weiland from referring to himself as a former member of the band).

Legal Lessons for Band Members (and All Business Partners)

Ugly divorces among band members are nothing new, of course. The experiences of the Beach Boys, Van Halen, Yes, Nirvana (post-Cobain), Misfits and En Vogue, among others, illustrate that when the relationship among creative types (or their heirs) joined together in strategic business partnerships fails, hard feelings and sometimes outrageous allegations abound. Popular culture is rife with examples of bands of the past with “dueling lineups” touring under the band name and claiming the band’s legacy (and lucrative name recognition). For example, The Little River Band has replaced all of its members multiple times. In fact, members of the original band lineup were sued in the mid-2000s when they wanted to tour under the name “Little River Band” and members of the current lineup would not agree to allow it.[2]

The likelihood that deteriorating band relations will spawn potentially career-wrecking litigation tarnishing the band’s brand can be reduced if the band is properly organized as a legal entity and its members committed to well-written, comprehensive partnership agreements. In the case of protecting the partnership’s critical intellectual property, partnership agreements can help resolve individual partner claims to intellectual property – such as the issue of who actually owns the rights to a particular song within the band’s catalogue – and can prove to be an important tool for the court in deciding on such issues.

Here, the members of STP entered into a partnership agreement to address these concerns. The band is asserting against Weiland a violation of that agreement by his use of STP’s name, images and artwork, including the names of its two most famous albums, Core and Purple, in promotions and advertising for his own and not the band’s benefit. Because the STP partnership agreement specifically addresses the issue of ownership to the band’s intellectual property, according to the complaint, no individual partner may use the band’s trademarks, copyrights, artwork and other marks, preserving the commercial advantage of this body of intellectual property for the benefit of the enterprise and not to the individual partners. These types of provisions help insure that the enterprise has a life beyond its individual partners if the band lineup evolves over the band’s history (which is frequently the case). The band may own guitars, amplifiers and percussion instruments, but the value of these hard assets pales in comparison to the value of its intellectual property, the very fruit of its creative efforts.

Every partner has expectations upon entering a business venture and his or her own perceived value to the enterprise. The real question becomes whether the partners agree on expectations and contributions to the collaborative effort.

Unfortunately, partners’ expectations are often vague or incompletely formed at the time of joining forces with one another. Worse yet, partners often change their expectations over time and with the arrival of success, money, and fame, their perceived value to the collaboration can change dramatically and be at extreme odds with the other partners. Some argue that the original agreement could no longer govern the partnership’s affairs because of such success. If you expect success, you should be prepared for it. Band members (and all business partners) should clearly negotiate and then document their expectations in a written agreement to which they will commit. Otherwise, their fate may be in the hands of the court.

As in business and as in marriage, choose your partner carefully and always have an enforceable prenuptial/partnership agreement in place before crossing the threshold. A little business planning can help preserve the value of your efforts long after the creative partnership has ended. If you are a member of a band and desire the band’s legacy to continue despite potential lineup changes, you should address the rights to the band’s intellectual property in a form of a partnership agreement.

The author gratefully acknowledges the efforts of his oldest and best friend, Attorney Jim Cress, in reviewing a prior draft of this article.

[2] The rock band, Journey, may take the cake in this regard. Reports indicate that in its nearly 40-year history, Journey has employed six lead vocalists, six drummers, three keyboardists, and three bassists, some of whom did not last a full year with the band. http://tvtropes.org/pmwiki/pmwiki.php/Main/RevolvingDoorBand