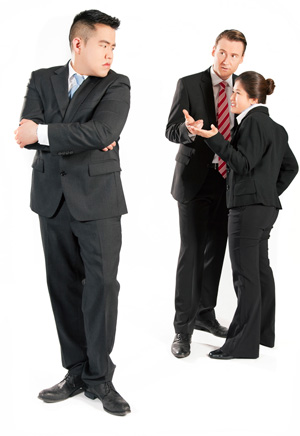 In this new economy plagued with high unemployment and fiscal uncertainty it has become increasingly more frequent for ex-employees to bring workplace defamation claims against their former employer alleging that statements made in connection with that employee’s dismissal were defamatory. While a majority of these types of cases are hard to pursue, there have been some cases that have survived dismissal and been rewarded with large verdicts from juries.

A defamation claim consists of:

But, Showing the Human Resources Manager a Copy of a Termination Letter Can’t Possibly Be Considered “Published to Third Parties,” Right?

Wrong. Minnesota tackled this issue in Frankson v. Design Space Int., 394 N.W.2d 140 (Minn. 1986). The Minnesota Supreme Court stated that intra-corporate communications are considered “publications” to satisfy the second element of a defamation, but the real inquiry should be whether these intra-corporate communications are qualified privileged, which is an affirmative defense.

What is Qualified Privilege?

A defamatory statement is protected by a qualified privilege if “made upon a proper occasion, from a proper motive, and…based upon reasonable or probably cause.” Brooks v. Doherty, Rumble & Butler, 481 N.W.2d 120, 124-25 (Minn. Ct. App. 1992). In almost every instance an employer will invoke the affirmative defense of qualified privileged when faced with an employee defamation case and rightfully so because there is usually ample evidence the statements were made for a legitimate purpose and with good faith.

In Frankson v. Design Space, Frankson, a sales manager for Design Space, was terminated and in his termination letter it stated that it was due to his “failure to increase business as a major projects representative.” Frankson sued and alleged, among other things, that the statement regarding his failure to increase business was defamatory. The Court of Appeals held that the statement was qualifiedly privileged, holding “an employer’s communication to an employee for the reason for discharge may present a proper occasion upon which to recognize a qualified privilege.”

In Order to Defeat Qualified Privileged, an Ex-Employee Must Prove Malice

If in a workplace defamation action an employer asserts and provides evidence of a qualified privilege, then the ex-employee must show that the employer acted with actual malice. In the absence of any malice, the ex-employee cannot recover.

Returning to Frankson, Frankson asserted that Design Space acted with malice because there was “ill will” due to a bonus dispute between the parties. The court held that was not enough to show malice stating that providing “another possible reason for the action taken” is not enough to find that malice existed when there was direct evidence of Frankson’s less than stellar sales record.

Beware: An Employer Can Be Sued For Defamation Even if the Alleged Defamatory Reason Was Only Relayed to the Employee

While this seems incredibly contradictory to the whole notion of requiring defamatory statements to be publicized, Minnesota is a part of a small minority of states that recognize the doctrine of “compelled self-publication.” Basically, the employee feels that even though no one else was told of the reason for their termination they were nonetheless compelled to repeat the defamatory reason during the process of applying for a new job. Fortunately for business owners, few employees have been able to be successful with this doctrine and the Minnesota Supreme Court has opined that it should be “narrowly applied.”